Ultra low energy devices possible with the flick of a switch

Researchers at Monash University are now one step closer to providing a solution to minimising the energy wasted by modern telecommunications and computing – simply by the flick of a switch.

Professor Michael Fuhrer, Dr Mark Edmonds and James Collins from the School of Physics and Astronomy at Monash University have, for the first time, successfully ‘switched’ a topological insulator off and on via application of an electrical field.

This announcement is a major advancement towards the creation of a functioning topological transistor - a transistor that would burn much less energy than conventional electronics.

“Ultra-low energy electronics, such as topological transistors, would allow computing to continue to grow without being limited by available energy. This becomes extremely important as we near the end of achievable improvements in traditional, silicon-based electronics,” said Professor Fuhrer.

“Information and communications technology already consumes 8% of global electricity; a figure that is doubling every decade. To solve this problem, we need to develop a new type of transistor that burns less energy when it switches.

“This discovery makes an important contribution in the direction of topological transistors that could transform the world of computation.”

“And with billions of transistors in each electronic device, switching billions of times each second, the amount of wasted energy adds up,” explained study co-author James Collins, a Monash University PhD student.

In order to be viable to the current silicon-based technology, topological transistors must operate at room temperature, without the need for expensive supercooling, and must ‘switch’ between conducting and non-conducting at a rapid rate through an electric pulse.

“While switchable topological insulators have been proposed in theory, this is the first time that experiment has proved that a material can switch at room temperature, which is crucial for any viable replacement technology,” Dr Edmonds said.

The research was conducted through FLEET (The Australian Research Council Centre of Excellence in Future Low-Energy Electronics Technology) – a collaboration of more than 100 researchers at seven Australian universities and 13 Australian and international science organisations.

STMicroelectronics and Fidesmo, the contactless-services developer and Mastercard Approved Global Vendor, have created a turnkey active solution for secure contactless payments on smart watches and other wearable technology.The complete payment system-on-chip (SoC) is based on ST’s STPay-Boost IC, which combines a hardware secure element to protect transactions and a contactless controller. This features a proprietary active-boost technology that is said to maintain reliable NFC connections even in devices made with metallic materials. Its single-chip footprint fits easily within wearable form factors, ST adds.Fidesmo’s MasterCard MDES tokenisation platform completes the solution by allowing the user to load the personal data needed for payment transactions. Over-The-Air (OTA) technology makes personalisation a simple step for the user without any special equipment.“STPay-Boost, featuring our secure element and performance-boosting active contactless technology, is a unique single-chip payment solution that fits the design constraints of wearable devices,” says Laurent Degauque, Marketing Director, Secure Microcontroller Division, STMicroelectronics. “Fidesmo’s personalisation platform provides the vital ingredient to create a turnkey payment solution that device makers can simply take and use with minimal engineering and certification effort.”“Our co-operation with ST opens up a new market for us with support for lightweight boosted secure elements, and broadens choices for our customers,” says Mattias Eld, CEO of Fidesmo. “Together, we have created a unique offering that is sure to impact the hybrid watch market and drive the emergence of innovative new products such as wristbands, bracelets, key fobs, and connected jewellery.”Kronaby, the Malmö, Sweden-based hybrid smart-watch maker, has embedded the STPay-Boost chip in its portfolio of men’s and women’s smart watches that offer differentiated features, such as freedom from charging and filtered notifications. The SoC with Fidesmo tokenisation enables Kronaby watches to support a variety of services such as payments, access control, transportation, and loyalty rewards.Jonas Morän, Global Product Manager at Kronaby, adds: ”We have achieved an intuitive and seamless user experience leveraging the ability to communicate with the Secure Element in the watch using Bluetooth. In addition, the ST/Fidesmo chip’s boosted wireless performance and compact size gives us extra freedom to style our watches to maximise their appeal in our target markets.”
2018-10-22 00:00 reading：612 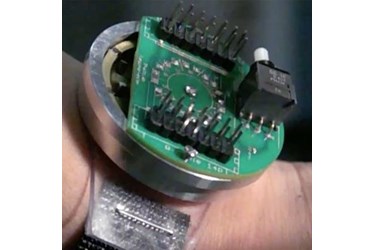 A wearable device that can generate enough power to run a personal health monitoring system through body movements alone, has been created by a team of researchers from Penn State's Materials Research Institute and the University of Utah."The devices we make using our optimised materials run somewhere between 5 and 50 times better than anything else that's been reported," said Professor Susan Trolier-McKinstry of Penn State.Prof. Trolier-McKinstry and her former doctoral student, Hong Goo Yeo, used the piezoelectric material known as PZT; coating it on both sides of a flexible metal foil to a thickness four or five times greater than in previous devices. Greater volume of the active material equates to generation of more power. By orienting the film's crystal structure to optimise polarisation, the performance - known as the figure of merit - of energy harvesting was increased. The compressive stresses that are created in the film as it is grown on the flexible metal foils also means that the PZT films can sustain high strains without cracking, making for more robust devices."There were some good materials science challenges," Prof. Trolier-McKinstry said. "The first was how to get the film thickness high on a flexible metal foil. Then we needed to get the proper crystal orientation in order to get the strongest piezoelectric effect."Collaborators at the University of Utah and in Penn State's Department of Mechanical Engineering designed a wristwatch-like device that incorporates the PZT/metal foil materials. The device uses a freely rotating, eccentric brass rotor with a magnet embedded, and multiple PZT beams with a magnet on each beam. When the magnet on the rotor approaches one of the beams, the magnets repel each other and deflect the beam, plucking the beam in a process that is referred to as frequency up-conversion. The slow frequency of a rotating wrist is converted into a higher frequency oscillation. The design of this device is more efficient than a standard electromagnetic harvester - like those used in self-powered watches - according to Prof. Trolier-McKinstry.In future work, the team believes they can double the power output using the cold sintering process, a low-temperature synthesis technology developed at Penn State. In addition, the researchers are working on adding a magnetic component to the current mechanical harvester to scavenge energy over a larger portion of the day when there is no physical activity.
2018-09-18 00:00 reading：814
Popular categories
Boxes, Enclosures, Racks Cables, Wires Circuit Protection Connectors, Interconnects Development Kits Electromechanical Embedded Solutions Fans, Thermal Management Optoelectronics Others Passive Components Power Semiconductors Sensors, Transducers Test and Measurement
Hot labels
ROHM
IC
Averlogic
Intel
Samsung
IoT
AI
Sensor
Chip
Original authorized brand